Posted on 3rd May 2022 Posted By: hhnlcc-admin Categories: Uncategorised

If you are in the midst of a difficult season it can feel like your resources are depleted, and you just have nothing left. If at this point your faith makes even more demands on those resources suggesting that you can only sound positive all the time, it is even more tiring trying to feel like a proper Christian. When Paul found himself suffering from physically frailty it disturbed him. In fact, it disturbed him so much that he prayer repeatedly about it, and what did God do for this towering pioneer of the Christian faith, this man who saw the miraculous regularly affirming the words that he preached? Here’s what the bible says,

“The extraordinary level of the revelations I’ve received is no reason for anyone to exalt me. For this is why a thorn in my flesh was given to me, the Adversary’s messenger sent to harass me, keeping me from becoming arrogant. Three times I pleaded with the Lord to relieve me of this. But he answered me, “My grace is always more than enough for you, and my power finds its full expression through your weakness.” So I will celebrate my weaknesses, for when I’m weak I sense more deeply the mighty power of Christ living in me.”

Well, not quite nothing, but he certainly didn’t heal him. What he did do was something quietly different, and something he might just be doing for you. In fact, in Paul’s case he came to realise that the reason God hadn’t just healed him was that the frailty prevented him from becoming too proud. As well as a quite supply of resources that would help him get through intact, known as grace. The sickness itself had a purpose. It was not a sign of a lack of Godliness but a sign of a load of it! So, for Paul, weakness, infirmity and perhaps even sickness should not be a source of shame, an indicator of some hidden sin, or imaginary evidence for some crackpot super spiritual theory but something Paul would even boast about. “Look at the state of me” he seemed to say, “this is the sort of person through whom, the miraculous of God is delivered, I know I’m amazed too!”

May God’s grace be enough for you to keep going, and that is enough of a spectacular victory for today. Keep going. 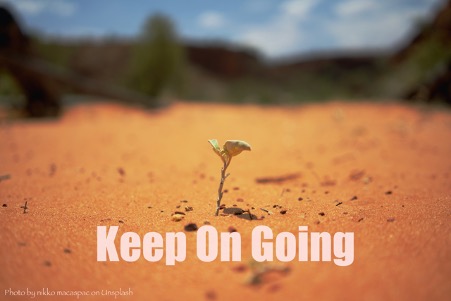